A nightmare for girls: child marriage

Teenager Ahlam was married off and was forced to leave school. She tried hard to change her mother’s mind, but the decision had been made and was out of her mother’s hands too.

Her family’s reason for marrying her off at a young age was the financial difficulties they faced. They sought to have a smaller household in order to be able to get by. Her father was bedridden due to a chronic disease, which was a heavy financial burden on the family.

“We needed a lot of money for [the treatment of] my husband, and I didn’t have any job. That’s why when an acquaintance requested the hand of my eldest, I consented,” said the 52-year-old Fatima Mahmood, Ahlam’s mother.

“She was very dispirited and said that while her friends are getting an education, she has to get married and would not be able to go to school”

Ahlam, Fatim’s eldest, was just a 14-year-old schoolgirl who would still play with the neighbourhood kids sometimes at the time she was married off. “She was very dispirited and said that while her friends are getting an education, she has to get married and would not be able to go to school,” Fatima told KirkukNow while sobbing, as she thinks that her daughter’s calamity was partly her responsibility.

Ahlam has two younger siblings, a girl and a boy, who were able to keep going to school as she had “sacrificed herself for the sake of her family’s financial survival” and her life turned to misery from then on.

There are no detailed official statistics on the rate of child marriages in Iraq, but according to activists and NGOs the rate is increasing due to the country’s dire conditions in recent years caused by the war the so-called Islamic State (IS) brought and the financial crisis.

Ari Ahmad, a consultant attorney at the Court of Kirkuk told KirkukNow: “Child marriages in [Kirkuk] City Centre, the suburbs and the countryside are still being arranged. It is partly due to adolescence romance, the misuse of social media, lack of awareness and the dominance of religion.”

The lawyer currently handles several cases of 14- and 15-year-olds who after a short period separated.

Such marriages end up in disaster. They [the teenagers] don’t have a sense of responsibility. When they divorce, their children face misfortune

“Such marriages end up in disaster. They [the teenagers] don’t have a sense of responsibility. When they divorce, their children face misfortune, and two families get ruined”: said Ahmad, and added that a part of those marriage contracts are made outside the courts with Imams as arbiters, which creates another complication for the courts. 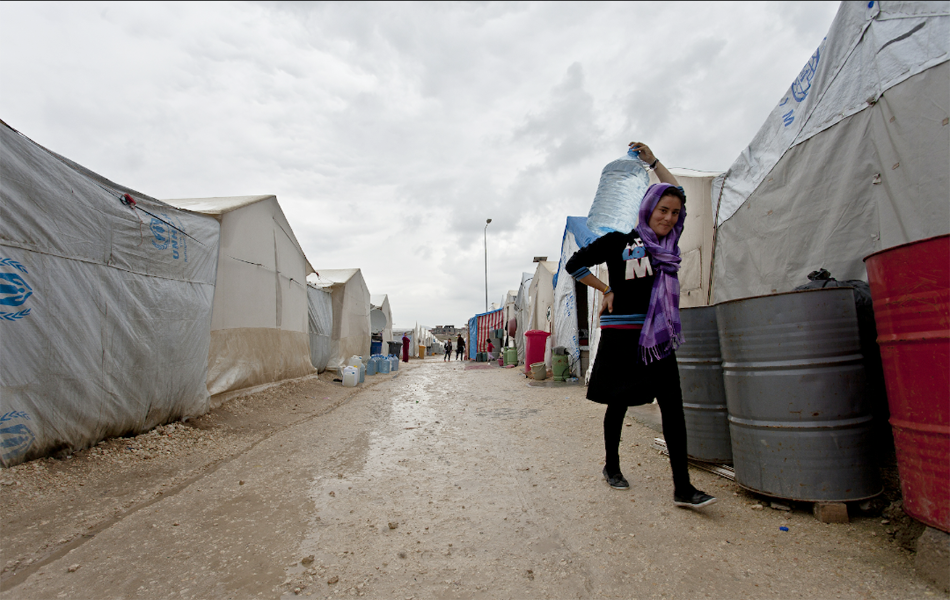 Duhok - an IDP girl at a camp. Photo: Oxfam

According to the Iraqi Constitution, anyone who gets married outside of the courts will get either a prison sentence of six to twelve months or have to pay a fine of a sum between $380 and $1260. And anyone who gets married for the second time outside of the courts will get a prison sentence of three to five.

Fatima thinks that she plunged her daughter into misery when she forced her to marry, as she couldn’t cope with being with another family at such a young age.

“Things got to a point that her husband would lock her up at home and would force her to wear an abaya [a black overgarment worn by some women over regular clothes to completely cover their bodies]. On top of that, he was violent and beat and insulted her. That’s why I have sworn not to let my other daughter get married until she is of appropriate age,” said Fatima.

Item 1 of Article 7 of Iraq’s Personal Status Law (ratified in 1959 and amended in following years), stipulates that a person must be over 18 to be able to get married. But Item 1 of Article 8 of the same Code, stipulates that if a person is older than 15, a judge can permit her/him to marry if her/his legal guardian consents and “if the eligibility and physical ability of the person in question was proven to” the judge. And Item 2 of Article 8 stipulates that “The judge can authorize the marriage of a 15-year-old person if he sees in it an urgent necessity. Giving such authorization is also conditional upon the attainment of legal puberty and physical ability.”

Nasir Shamo 16, a resident of Shingal, who has married a 15-year-old girl, told KirkukNow: “Before getting married, we were in love. That’s why we decided to be together forever. When there was a lockdown and curfew due to Corona, we got married this year.

“I think it’s normal for boys and girls to marry at such an age, because success and happiness have nothing to do with age. It is all about love and understanding one another.”

According to statistics by Iraqi Federal Supreme Court, the rate of divorce for underage marriages has been rising since 2014. And that most of the divorce procedures are conducted outside of courts.

Murad Namr, an activist in Shingal, says that according to their surveys, child marriages are on the rise. And that some of the teenagers conceal their real age or conceal the marriage.

According to Murad, there are different reasons for the rising number of child marriages; among them “teenage romance, impressionability, ostentation and those [girls] whose fathers won’t allow tehm to marry and [therefore] elope.”

According to statistics by UNICEF, 12 million underage girls get married globally per year globally.

Su’ad Abdulla, who married off her 13-year-old daughter to one of her relatives, told KirkukNow: “I have three daughters. We live in dire conditions: we live in a rented house, and my husband is bedridden. That’s why I was forced to marry off my daughter to alleviate the financial burdens upon us.” She added: “when my daughter reached the age of 15, we went to a court and made the marriage legal.”

My daughter’s marriage caused me much more grief than our misery and dismal financial condition. It is an agony that remains in my heart.

Su’ad, who is a Kirkuk resident, is more heavyhearted than before her daughter got married, and said: “My daughter’s marriage caused me much more grief than our misery and dismal financial condition. It is an agony that remains in my heart. I live in anguish because of my daughter’s suffering.”

Her regret is too late, she thinks, as her daughter was deprived of an education and at her husband’s house “she is subjected to physical and verbal abuse on a daily basis.”

Not only child marriages, but forced marriages, polygamy and ‘wife-for-wife’ (a sort of arranged marriage by which a male and a female, usually siblings, get married off to a female and a male from another family) have risen in numbers in many regions of Iraq.

Srood Ahmad, head of Iraq’s Hope Group told KirkukNow: “Child Marriages are on the rise, especially during the last four years. The Hope Group has organized many seminars and other activities to raise awareness on child marriage.

Ahmad added: “Those practices have become [part of the] culture, and their consequences are murder, self-immolation [by women], running away from home and missing an education.” He added that the reasons for the rise in child marriages are poverty, religion, lack of rule of law, negative effects of social media and low general awareness. He is not optimistic about the eradication of the practice, and warns that if measures are not taken quickly, it could lead to the collapse of society.

According to surveys by UNICEF, the group that is most vulnerable to violence, threats and mental distress, is those underage girls that get married off.

Ahlam, Fatima’s daughter from Khanaqeen, is one of those girls. She left her husband and returned to her parent’s house after just one year due to numerous marital problems.

“Ahlam divorced her husband and came back home. She lives with us now. She still suffers the trauma from that marriage. Nothing good came from that marriage, and her father died of cancer a month after [she got married],” said Fatima.

*Fictitious names used to protect the identity of some of the people mentioned in this article.