Shingal’s Giruzer (Qahtaniya) subdistrict does not get the national electricity feed due the destruction of cable lines during the war against ISIS. This is one of the obstacles that impedes the normalization of life for returning IDPs.

The assaults by ISIS and the war between them and Iraqi forces has left power lines to Giruzer in ruins. That’s why the subdistrict is reliant on small generators that generate a low-current feed sufficient only for light bulbs and phone chargers, not larger electric appliances like refrigerators, air conditioners and electric fans.

“There is no national electricity feed; there is only a generator provided by the municipality, which is only meant for light bulbs and mobile chargers because it has a weak current and not adequate for refrigerators, air conditioners and electric fans,” said Darwesh Sino Qasim, a resident of the subdistrict.

The most basic thing in this heat is cold drinking water, which we lack

After being displaced, Qasim has resettled in the subdistrict’s centre. He says they have it difficult there due to the summer heat, and that conditions are in a very poor state. He told KirkukNow: “The most basic thing in this heat is cold drinking water, which we lack. The truth must be told: if things go on like this, we will all get ill and will be compelled to go back to the camps.”

Next to cable lines, most of the infrastructure necessary for providing basic services is devastated, the reason behind the fact that none of the displaced had returned to the subdistrict before July 2019.

Sa’eed Kret Hajji returned to Qataniya two weeks ago, but lack of electricity has forced him to settle in a nearby village instead of his home in the town.

Hajji told KirkukNow: “Our house is in the subdistrict’s centre. We stayed there for a few days, but lack of electricity forced us to move. Because in this scorching heat, we neither have cold drinking water nor air conditioners.” 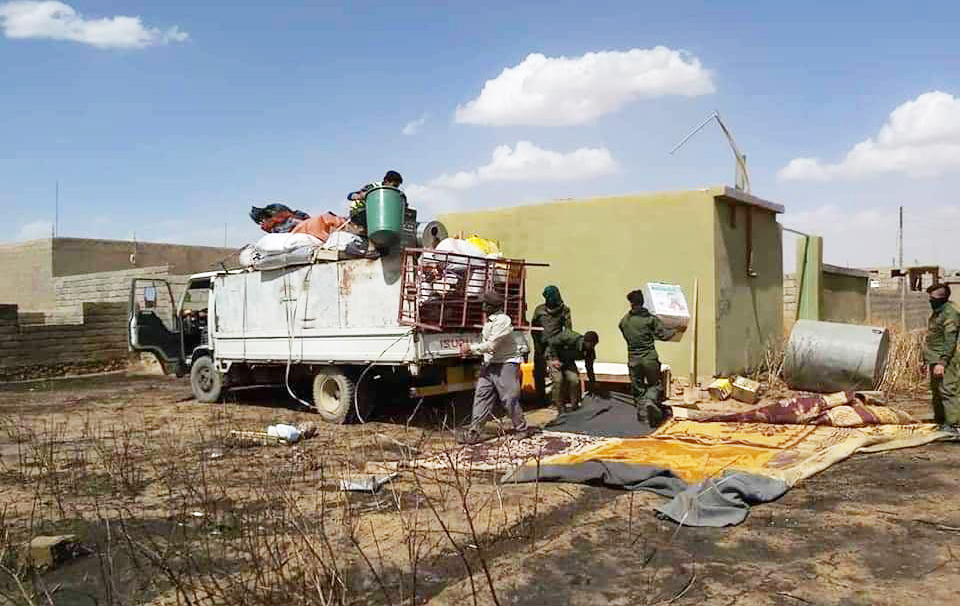 Shingal, 2020 - A family returns to Giruez after six years of displacement - Photo by KirkukNow

Hajji and other residents request the government that they should at least repair the power lines so that they are not forced to be displaced yet again.

The subdistrict's administration head, Jalal Khalaf, told KirkukNow that “during the ISIS war, the national electricity [grid] in the subdistrict was completely destroyed; cables and poles are gone, that’s why it needs reconstruction.”

The Nineveh Administration and the UNDP (United Nations Development Programme) have promised to repair the power lines in the region.

A high-level delegation from the UNHCR (United Nations High Commissioner for Refugees) visited the subdistrict to inquire about the resident’s problems on 6 July.

Khalaf said: “In a meeting with UNHCR, we discussed the complications, especially lack of electricity and water, laying asphalt roads and the reconstruction of government buildings. But also the distribution of aid to newly returned [IDP] families.”

Khalaf also mentioned the UN delegation were given minute details of the problems and that they have promised to make serious efforts in resolving the issues in the region.

Majority of Shingal District’s residents (including those of Giruzer subdistrict) were displaced six years ago due to the assaults by ISIS. Even though the region has been retaken from ISIS for several years now, only a small number of residents have returned.

“We contact the local and international organizations on a daily basis [to request them] to help the people of Giruez. We have conveyed the demands of the residents to Nineveh officials and the other responsible entities; that’s all we can do,” Khalaf said.

Prior to the assault by ISIS on the Shingal district, there were 10 governmental offices in Giruzer subdistrict."

Khalaf said that “four other offices will be reconstructed and will be reopened soon. Among them are the departments of Agriculture and Logistics and Transport.

Majority of Giruez residents are Yazidis, the minority that suffered the most in terms of lives and property from ISIS assaults. Next to mass murder and the disappearance of thousands including women and children, more than 300,000 Yazidis lost theirs homes and/or were displaced.

The Shingal District is located about 120 KM west of the city of Mosul. It fell under ISIS control on 3 August 2014, and was retaken from ISIS by December 2015.

I Had to Leave My Job Under Threats and Pressure

Conflict over land of Kaka'i minority in Daquq disputed territories

Detained for 99 days with no arrest warrant