When the provincial elections were held in Kirkuk in 2005, the Kurdistan Democratic Party (KDP) had only 7 seats within the Brotherhood list out of the 41-seat council, but now the party is holding nearly double that number despite that no elections have been held since then.

This report highlights the KDP’s policy to increase the number of its councilors in the 14-year-old council, enabling it to become the most influential power in the body and play a major role in coordinating the work of the council during the past 18 months, undermining the Patriotic Union of Kurdistan (PUK)’s efforts to appoint a new governor for the province.

The distribution of the Brotherhood list’s seats in 2005

According to an agreement backed by the late secretary general of the PUK Jalal Talabani and KDP leader Masoud Barzani in 2005, the Brotherhood list which also included a number of Arab, Turkmen, Christian and independent candidates participated in the provincial council elections in Kirkuk Province.

The elections were the first following the fall of the Ba’ath regime. The brotherhood list achieved a landslide victory securing 26 seats which entitled the Kurds to assume the position of governor as well as the head of the council.

Within the list which was led by current PUK politburo member Rizgar Ali, the KDP won 7 seats; the PUK took 5 seats, while the Islamic Union and the communist party won 3 seats each; meanwhile, the Kurdistan Toilers' party and the Kurdistan Socialist party each won a seat. The rest of the list’s 26 seats were held by Arab, Turkmen, Christian and independent figures. 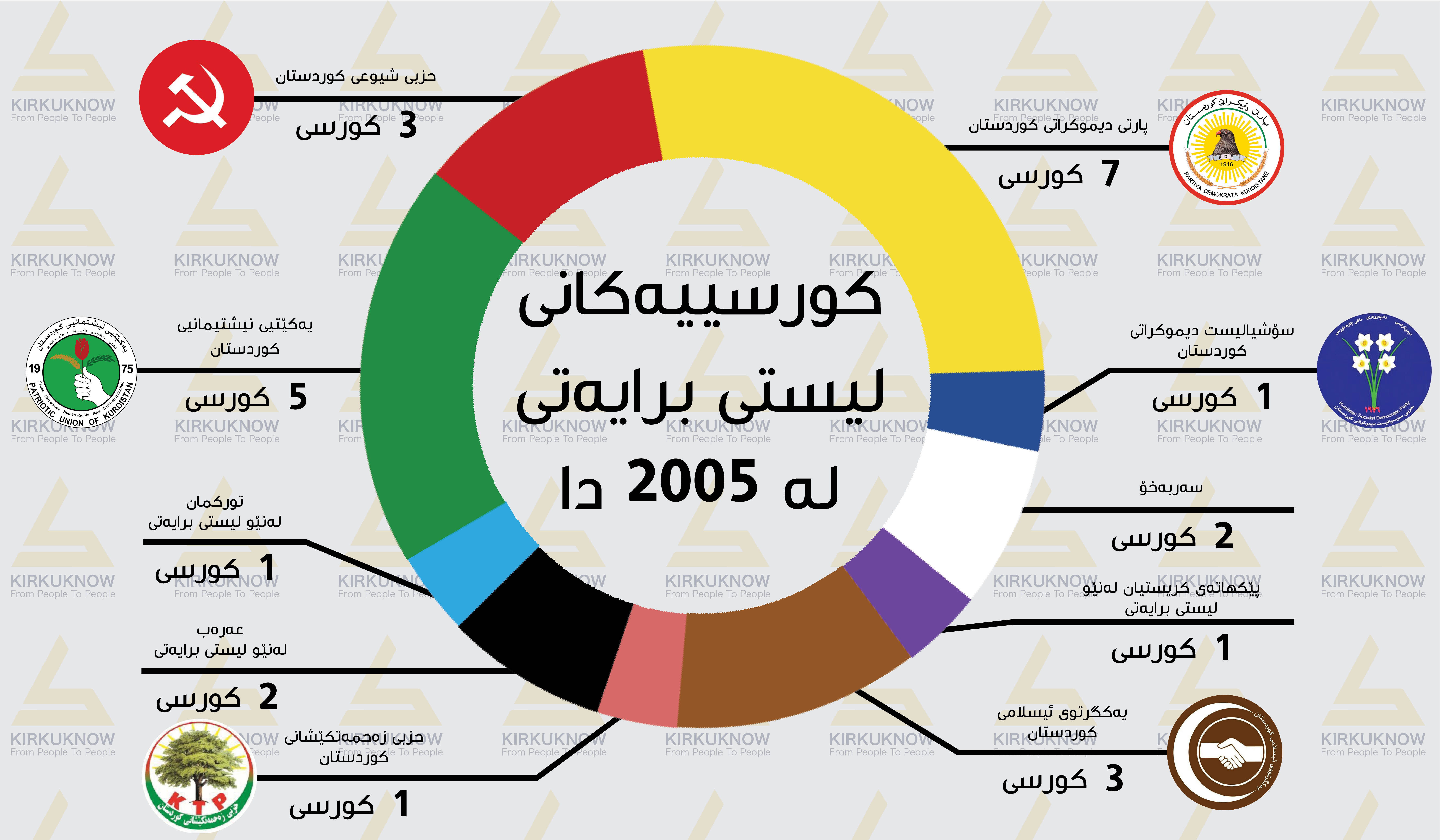 The equation has now changed remarkably compared to 2005 with the KDP becoming the number 1 beneficiary, followed by the PUK.

Members of smaller factions within the Brotherhood List began to join the two main political parties. The defectors included a member of each of the communist party, the Socialist party, the Labor party in addition to the Turkmen, Arab and independent councilors.

Members of the Socialist party and the Toilers party as well as one member of each of the Communist party and the Arab component joined the PUK; however the PUK has lost 3 of its members during the past 14 years.

In return, the KDP gained 2 members of the Arab and Turkmen component as well as an independent councilor.

The distribution of the council seats in 2019

The KDP now formally has 11 seats in the council, while the PUK holds 8 seats as a result of the changes that took place in the council members’ affiliations during the past 14 years.

Almas Fazil, former rapporteur of the council, speaking to KirkukNow, said, “One of the reasons behind the boost in KDP seats is that the vacancies of many of the council member who quit were filled by KDP members according to the ranking of the candidates’ list.

Despite that the PUK seats lost three of its members after Almas Fazil and Layla Hassan became Iraqi MPs and after Rizgar Ali stepped down of the position of head of the provincial council, the party now has 8 seats.

In turn, the KDP besides retaining its own 7 seats it obtained 4 more seats after Riyadh Muhammad from the Arab component, Irfan Jamal Kirkukli from the Turkmen component, Fuad Husseni and Ali Namiq (both independents) joined the faction. 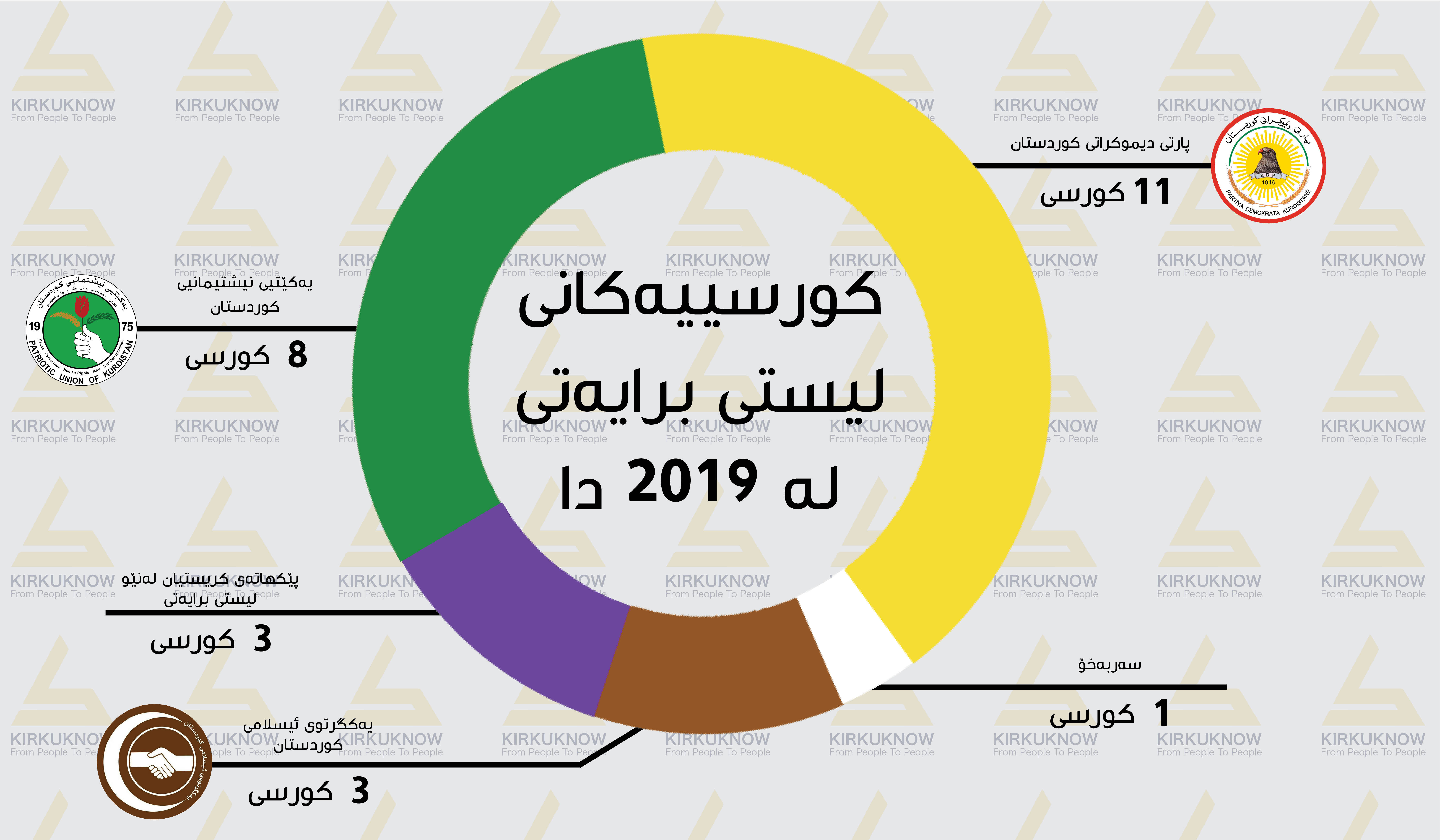 Jwan Hassan, a council member on the Islamic Union’s list told KirkukNow their faction is the only one which retained its seats and their members remained committed to their party’s policy.

The Kirkuk provincial council is made up of 41-seats with the KDP holding the most council seats (11 seats) followed by the Turkmen Front (9 seats), the PUK (8 seats), the Arab bloc (6 seats) and the Christians and the Islamic Union (3 seats) each.

The rise and fall in the political parties council seats is not only a change in numbers, but has affected citizens’ daily life.

The 14-year-old council is nearing its end with the Iraqi high electoral body making preparations to hold elections in April 2020 across Iraq, including Kirkuk.