Layla did not expect that the Organization of Women’s Freedom in Iraq (OWFI), which has sheltered her and women who fled from violence and oppression, might be closed due to a lawsuit filed by the secretary-general of the council of ministers.

Layla, 28, dreamed of being a radio presenter after living in a tribal community shaped by patriarchal mindset. Such an environment forced her to marry one of her cousins, while she was “beaten” after she expressed her rejection for the marriage, she said.

Layla, which is pseudonym, said that after she was beaten, she decided to run from that community and “submit herself to an unknown fate no matter what the results will be because the most important point to me is finding myself, without violence and forcefully marrying someone, whom I do not love.”

Layla’s Journey was full of fears and risks until she reached “the light at the end of the tunnel,” when OWFI sheltered her, besides that, “it provided me with a healthy environment, that believes in the rights of women and the direction which I consider as the right one for myself.”

“During that period, I was studying and playing sports. I participated in some development courses and became joined a local radio station, which I was able to do with the psychological and financial support of the OWFI,” Layla claimed.

OWFI has formally been registered in the government and now has been sued by the secretary-general of the council of ministers for “violating the laws by sheltering those women have fled from their families or have cases related to honor.”

OWFI, since its foundation, 17 years ago, have dedicated its efforts to spread awareness on women freedom and hardly worked on “ending the era of oppression against women and the dominance of men, which have made Iraqi women not to feel their dignity and prevented them from having roles in society,” writer and activist Sulaf Abdul-Hussein said.

The core vision of WFOI is about the beliefs that women are equal to men and preventing gender discriminations. The organization opened the first women shelter in Iraq in 2013 to protect women “from honor killing” and human trafficking, eventually increasing the number of the shelters to 11 in five Iraqi provinces.

The shelters became the save haven for tens of women faced violence. The organization later received Ghrubr award as well as an award from Norwegian Raftu Foundation.

Such awards, as one of the leading person of the organization said, was not pleasing for the government authorities. As a result, the secretary-general of the council of ministers filed a complaint against the organization, accusing her and the organization of sheltering women who have fled their families and their tribes due to honor related cases as well as encouraging women to live by themselves. However, the OFWI reaffirms that their families force their daughters to marry and subject them to psychological and physical violence.

Hamid Al-Ghazi, the former general-secretary of the council of ministers, has called on the court to revoke the license of the organization and halt their works, claiming that, “the OWFI has breached the laws through sheltering women, who have fled their families and their tribes due to honor cases… the organization has called for the homosexual rights and has turned the phenomena into a topic discussed in the society. Also the organization has deceived girls through creating opportunities for them to migrate abroad.” 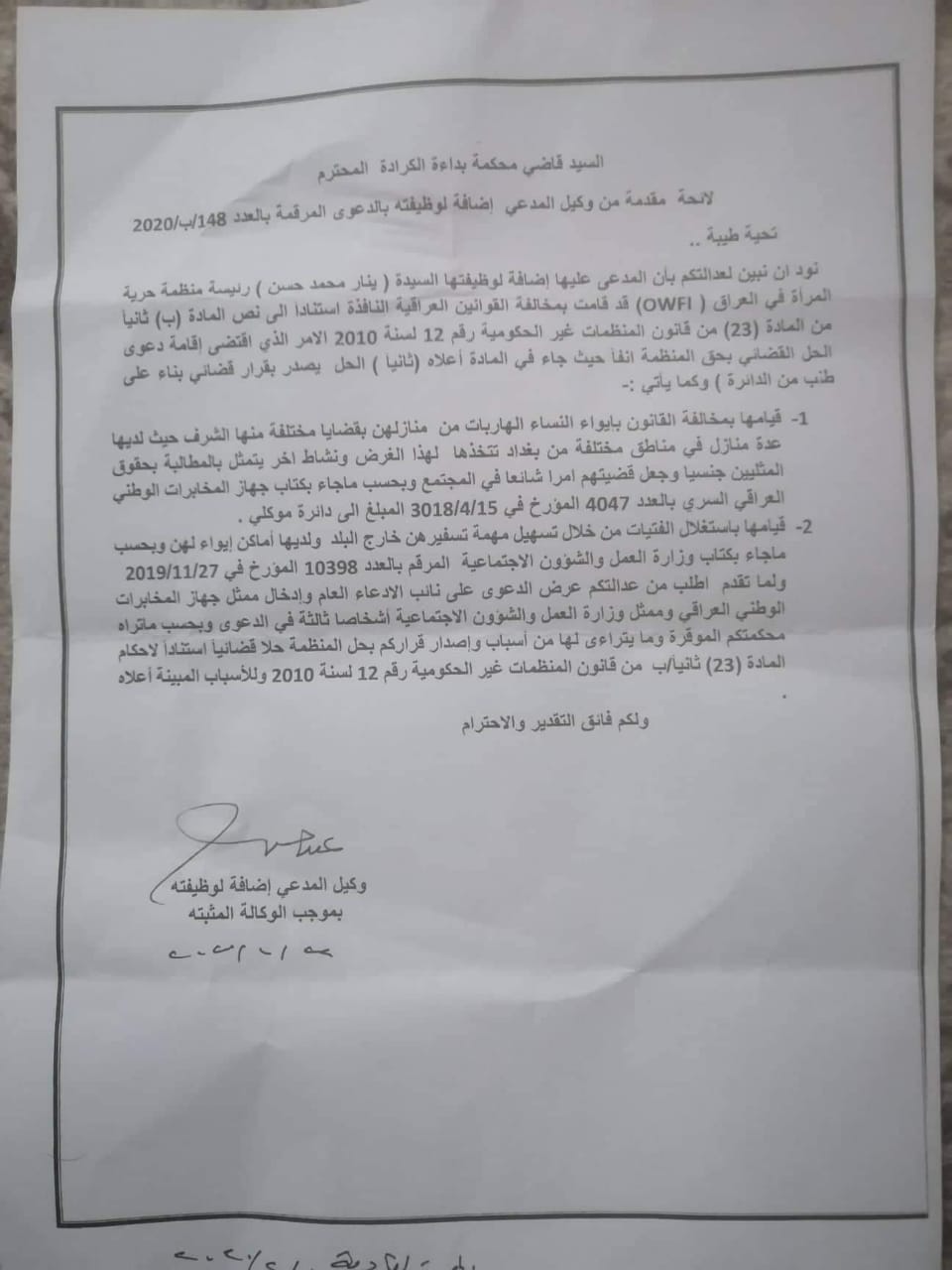 The organization refers the attempt to close the organization to the participation and the support it had for the social uprisings started since October 2019 in Baghdad and other Iraqi provinces.

“The decision coincided with our activities and support for the uprising nation, calling for the right of having a homeland that guarantees freedom, equality. Perhaps, our statement under the name of “the women of uprising” might be the best evidence for the longstanding rivalries between the militias and us, that dates back to years ago,” the statement mentioned.

The statement also indicates that, “the government of Adil Abdul Mahdi might want to target women movement before leaving office, as the council of ministers has expired due to the resignation of prime minister.”

The Karada court has received the lawsuit and decided to have the hearings on February 22, but the lawyers of the organization postponed until further notice. The case is yet to be proceeded due to the outbreaks of the novel coronavirus in the Iraq.

Yanar Mohammed, president of the organization, told KirkukNow that, “we have installed two tents at the Tharir Square (the stronghold of the protestors), where freedom seeking women held lectures and seminars on the women related topics, in which the role of women, the expectation of the movement for societal changes, and the way to achieve gender equality were discussed. Also, the importance of ending the social exploitation and the subordination of women based on religion, tribalism or any norms were debated as well as the establishing a legal framework against the patriarchal laws that the government has imposed.”

“The security forces, intelligence, and the militias that were deployed to the square observed the organization’s activities, attempted to suspend the license of the organization, and inform the council of ministers about the activities.”

“We will continue rescuing women, we are facing such a situation due to our beliefs in women freedom, without any restriction. We will continue working even if we are forced to do it secretly.”

The writer of this article attempted to reach Hamid Al-Ghazi, who filed the lawsuit, to respond to the claim that the reason behind his complaint is the participation of the ogrnization in the protests. However, he could not give any speech “because he was busy with cooperating with the coronavirus crisis cell,” his office said, “the reasons for the lawsuit have bene explained.” 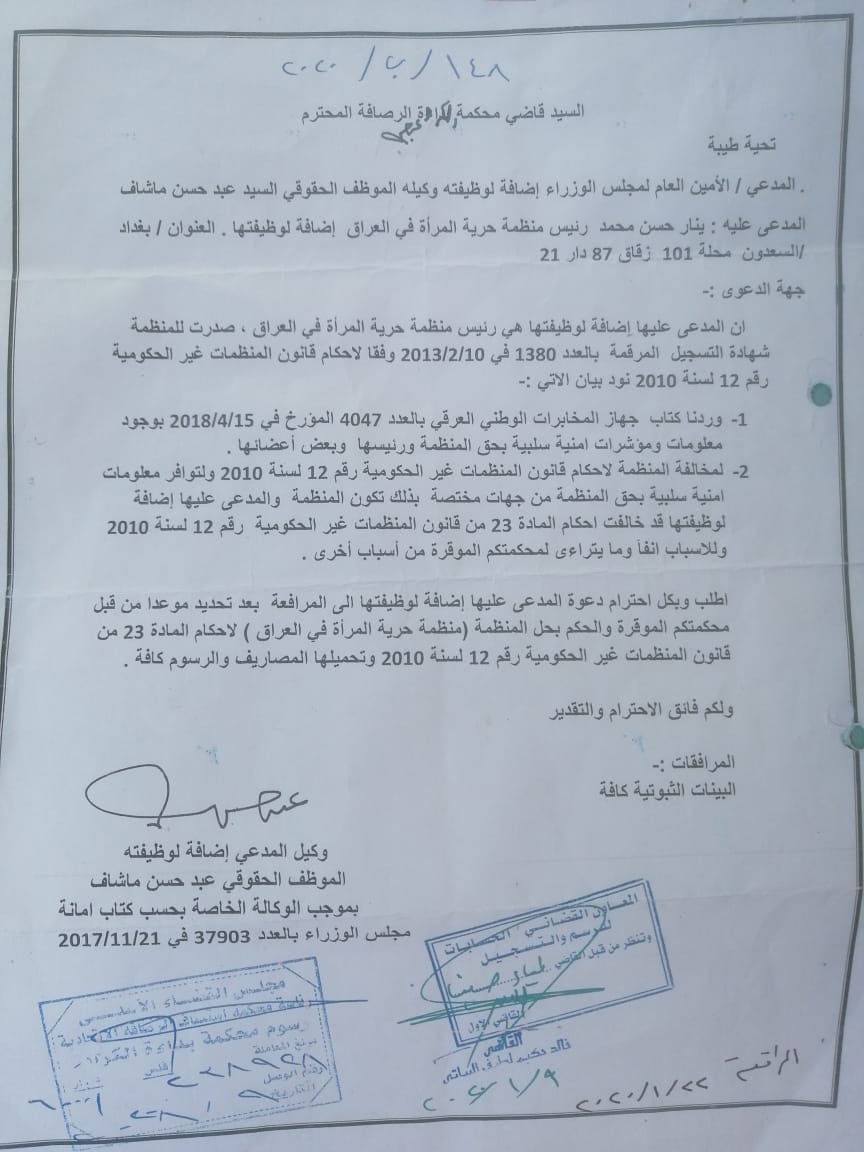 Changing the policies of Secretary-General of the Council of Ministers

A source from the Secretary-General of the Council of Ministers, to which the non-governmental organization (NGO) office belong, revealed that the shift of the policies of the secretary general toward the civil society’s organizations.

The source, who preferred to remain anonymous, said that, “the change started when Hamid Al-Ghazi was entered the office, who is from the Sadr movement. He is committed to his tribe and religion, which does not match with the aims of the NGOs working for the rights of women and minorities.”

He is committed to his tribe and religion

“Such perception is clearly seen in the filed lawsuit,” the source added.

Sulaf Abdul-Hussein, a writer and activist, claimed that, “she had a great hope that the authorities would understand the aims of the organization, which could have been achieved without obstacles, but unfortunately, they did not understand the aims to build a mature and human friendly society.”

She called upon the court, “to look at the freedom of women as a need of human and it should be achieved even if some people do not want to.”

Layla is hopeful that the rule of law will resolve the case in the interest of the women freedom organization in order to keep sheltering oppressed women as well as to change the mindset of the politicians to understand the importance of gender equality.

200 houses deprived of national electricity in Daquq, south of Kirkuk